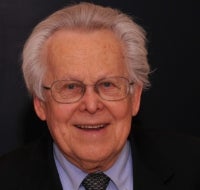 Dr. Andrejs "Andy" Baumhammers is a familiar face around the Department of Periodontics and Preventive Dentistry, having been in the department since 1967, where he started as an assistant professor and department chair.

"I was the first formally-trained periodontist to be a full-time faculty member at Pitt," Dr. Baumhammers said. "I soon recruited other full-time periodontial faculty and those were Dr. Daniel Fine, Charles Mahan, James Conway and Keeton."

"Also, we had two peridontally trained qualified general practioners teach part-time in the periodontics department to show dental students that you do not have to be a periodontist to carry out comprehensive periodontal for your patients."

The department also had a periodontal surgery requirement of four quadrants of surgery for dental students, he said. Baumhammers stepped into a part-time clinical professor role in 1976 so that he could main his periodontics practice, he said.

"My main reason for resigning the full-time position was that it was too difficult to teach full-time and at the same time maintain an outside private practive of periodontics. The School of Dental Medicine in the 1960s and '70s did not have intramural practice facilities like they do now," he said, referring to University Dental Health Services (UDHS), the SDM's faculty practice.

Among Dr. Baumhammers' achievements, he counts performing the first dental endosseous dental implant surgery at Pitt, in 1970. He has given presentations on dental implants throughout the United States, France, Mexico and Venezuela. Author or co-author of two dozen refereed articles, he also is the author of "Temporary and Semipermanent Splinting: An Atlas of Clinical Procedures."  Dr. Baumhammers has also authored or co-authored more than two dozen abstracts and other articles.

His interests include treatment of peri-implantitis and peridontal regeneration and in his spare time, he plays tennis.  Dr. Baumhammers  is married to a dentist, Inese Baumhammers, DDS. Now retired, she taught part-time in the Department of Oral Oral Diagnosis. He notes that he has four other female dentists in his family: his mother, Dr. Margarieta Baumhammers, his mother-in-law, Dr. Herta Dzintars, and aunt, Dr. Anna Skenders, and a cousin, Dr. Nina Eglitis. 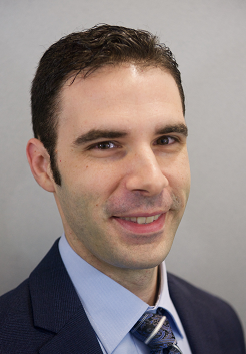 First year periodontics resident Curtis G. Dugas, DMD, MA, Capt. USAF was commissioned into the US Air Force as a captain in September after about a year of preparation. But his enlistment is a move that has, in a way, been a long time in the making.

“My mother worked for the Marine Corps her whole life,” said Dr. Dugas, a New Orleans, Louisiana native. “Every day, after school, growing up, I would go to a naval base. I was around the military my whole life.”

According to Dr. Dugas, his healthcare professions recruiter, Master Sgt. Gervacio Maldonado, said it was the best attended ceremony he has seen.

“The support from my faculty and co-residents has been great,” Dr. Dugas said. “They’ve been very supportive. I understand that I’m standing on the shoulders of many others who support me. Even though I was on stage at that ceremony, it wasn’t so much about me, but the people I will serve.”

Dugas was one of two applicants selected from both periodontics residents and practicing periodontists in the country for the Air Force program this year. The highly competitive process includes review of applicants by the Air Force head of periodontics and the Surgeon General of the Air Force. The application has to also be signed off on by the president of the United States, Dr. Dugas said.

“I guess you could say we are pretty well-vetted,” he said.

To Dr. Dugas, all the effort is worth it.  “Even though I got commissioned right now,  I am already a captain. By the time I’ve done my training, I will have been a captain for three years already. I’m here to train to be the best periodontist I can be.”

While he has always been open to the military, Dr. Dugas’ path to the Air Force has taken him on quite an interesting journey. After studying music as an undergraduate at the University of New Orleans, he earned a MA in Arts Administration from the same university. A professionally trained bass player; during graduate school he taught music. After that, he worked for the Louisiana Philharmonic Orchestra as an administrative executive.

His career path took a unique turn after he married his wife, Yoo Jin Chung. Now a resident in Pitt’s prosthodontics department, she was working on becoming a dentist and inspired her husband to look into doing the same.

“I didn’t want to be separated from my wife while she was in dental school and be in a totally different state,” Dr. Dugas said. “So I shadowed a dentist – and he was a musician, too – and I loved it. I could see that it was not impossible to do both.”

Dr. Dugas notes he was fortunate also in that two of the board members at the orchestra where he was employed were dentists.

“I would talk to them about my situation and they would say, ‘just try it.’ So there was path there (to dentistry). It wasn’t just a sudden left turn,” he said.

Dugas and his wife attended the Lake Erie College of Medicine (LECOM) together for their dental training. They completed three years at LECOM’s Florida campus and the final year in Erie, Penna.

At LECOM, two of his mentors had also been in the Air Force Dental Corps. Learning about their experience, he said, “really just pulled me in.”

Already, Dr. Dugas feels the same about Pitt SDM’s periodontics residency. The LECOM faculty – many of whom were graduates of the Pitt SDM – left him with a great impression about the program. As did Pitt SDM’s emphasis on research.

“I really enjoyed seeing all the research opportunities,” Dr. Dugas said. “Especially with Dr. Sfeir, that guy is awesome. From my program director,   Dr. Kelly Bolden-Williams to my co-residents, I really like the culture of the periodontics department. It’s very understanding and still strives for excellence. It’s very inviting.”

Copyright 2021 | Send feedback about this site