Dr. Krzesinski received her dental degree in 1986 from Georgetown University School of Dentistry. After completing a general practice residency at Jersey City Medical Center she spent three years as an independent contractor to the US Army at Fort Benning, Ga. She then completed her prosthodontic residency at University of Medicine and Dentistry of New Jersey (now Rutgers)  followed by both a residency and fellowship in maxillofacial prosthodontics at the University of Pittsburgh  from 1992-1994. Upon completion she has been active in both the faculty at the University Of Pittsburgh School Of Dental Medicine, UPMC Dental Center, and in private practice. She was  the director of the Pitt Dental Medicine AEGD Program in 2002 through 2018.  Since 2018 Dr. Krzesinski has been teaching Prosthetics to both first professional students and post graduate prosthodontic residents.  She also provides maxillofacial prosthodontic care for patient at the UPMC MUH Dental Center.

In addition to her faculty duties, Dr. Krzesinski maintains active membership in several local, state, and national dental associations.  She  is appointed as a  a Commission on Dental Accreditation (CODA) Site Visitor for AEGD Programs and a CDCA – WREB Examiner. 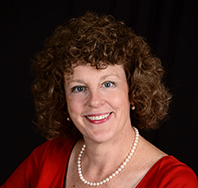