Born in Italy, Dr. Guiseppe (Beppe) Intini earned a degree in dentistry in 1995 from the University of L’Aquila (Italy). In 2000, he received a master’s degree in oral sciences from the University at Buffalo (USA), and in 2007 he received a PhD in oral biology and a certificate in clinical periodontology from the University at Buffalo (USA). From 2007 to 2012 he has been a postdoctoral fellow of Developmental Biology at the Harvard School of Dental Medicine and a principal faculty member of the Harvard Stem Cell Institute. He also is a diplomate of the American Board of Periodontology.

Dr. Intini spent the first three years of his post-doctoral fellowship under the mentorship of Dr. Vicki Rosen at the Harvard School of Dental Medicine and two years under the additional mentorship of Dr. Charles Lin and Dr. David Scadden at the Massachusetts General Hospital. His postdoctoral research accomplishments were acknowledged by the NIH/NIDCR with a Pathway to Independence Award (K99/R00 Award). His current research focuses on the biology of the skeletal and periodontal stem cells. The intinilab studies the molecular mechanisms that control the “stemness” of these stem cells, their contribution to tissue repair and regeneration, and their role in development of certain bone and periodontal diseases. Additional projects at the Intini lab focus on the role of cancer stem cells in development, maintenance and metastasis of osteosarcoma. Dr. Intini has recently been awarded an R21 from the NIH/National Cancer Institute to develop a novel approach to characterize the ostersarcoma cancer stem cells. Since 2010 Dr. Intini has been teaching about bone stem cell biology and bone regeneration in graduate and post-graduate courses. He also developed and directed a new post-graduate advanced education program, The Research Academy at HSDM and Forsyth, which is a joint venture between the Harvard School of Dental Medicine and the Forsyth Institute aimed at providing the opportunity to dentists interested in basic science to perform PhD level research. During his career at Harvard, Dr. Intini was recognized by the 2007 and the 2008 Harvard School of Dental Medicine Dean’s Scholar Award, the 2008 Young Investigator Award from the International Conference on Bone Morphogenetic Proteins, the 2009 American Academy of Periodontology Teaching Award, the 2010 Young Investigator Travel Award from the American Society of Bone Mineral Research, the 2012 American Academy of Periodontology Award for Outstanding Teaching and Mentorship, the 2013 Harvard Medical School Excellence in Tutoring Award, and the 2014 Harvard Medical School Eleanor and Miles Shore Scholars in Medicine Award. In recognition of his achievements, in 2015 he received the Distinguished Junior Faculty Award, the most prestigious award bestowed by the Harvard School of Dental Medicine. In 2016 he was inducted in the American Academy of Dental Science. Dr. Intini has been the PI of 9 grants, including grants from the NIH and the National Research Council of Italy, and supervised 18 trainees, many of whom have obtained a faculty position in dental schools in the US. he has been invited as speaker at national and international meetings and is an associate editor of the Journal of Translational Medicine. He regularly serves as ad hoc reviewer for scientific journals in fields of bone biology, orthopaedics, tissue engineering, and periodontology. As periodontist and attending clinician, Dr. Intini has interest in periodontal regeneration and bone augmentation procedures. 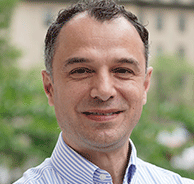